How to End Office Drama 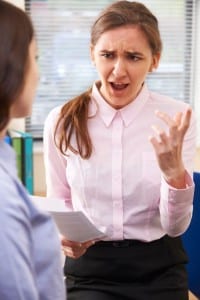 Many business owners I talk to are very frustrated with the “drama” that comes along with having employees. A question I hear over and over is, “Why can’t employees just get along with one another and do their jobs?” Often, business owners are blind to their own role in perpetuating the drama among employees. That was the case with Dr. Jones.

Dr. Jones,* the owner of a busy private practice, is known throughout his community as a caring, compassionate physician. He has strong personal values about how people should be treated. Dr. Jones regularly expresses his appreciation for his employees. In spite of this strength in communicating and motivating others, morale has been low and there’s a lot of conflict among his staff. There’s a lot of drama at work!

Why was this happening despite Dr. Jones’ best intentions?  When Dr. Jones sought my services, he shared with me what he most wanted–to serve the people of his community with exceptional care and to build a great team he could support in achieving their goals.

Dr. Jones expressed his frustration with the on-going drama occurring with his staff. “It seems there is always one person stirring up trouble. When that person leaves, it settles down for a while, but then the drama starts again. Why can’t people just get along and do their jobs?”

Dr. Jones kept his nose to the grindstone and tried to ignore the “office drama.” His motto: “Just do what needs to be done and move on!”

Dr. Jones ignored the finger-pointing and accusations among members of his staff. It seemed directed at one particular staff member, but Dr. Jones didn’t want to confront her. He doesn’t like confrontation. This staff member regularly came in late, left early, took long breaks, made insensitive comments to patients and generally performed poorly. This had gone on for several months and the situation was getting worse, instead of better. Dr. Jones confided in me that he fantasized about closing his practice just to end the drama.

When I spoke with the employees, I discovered something shocking to Dr. Jones. Although the rest of the staff was extremely frustrated with this particular co-worker, they were even more frustrated with Dr. Jones for not doing anything about the situation. In fact, one of Dr. Jones’ best employees confided in me that she was strongly considering a job offer she recently received. Dr. Jones had more problems on his hands than he even realized!

What was at the root of these problems in Dr. Jones’ office? Dr. Jones’ Achilles Heel was undermining the very thing he wanted most and wreaking havoc in his business. What he most wanted was a harmonious workplace where everyone got along. Instead, he had on-going office drama that just wouldn’t go away.

What is Dr. Jones’ Achilles Heel that kept undermining him despite his best intentions? Dr. Jones is overly concerned about the needs of others and he does not like conflict. He was reluctant to confront his staff member because he did not want to upset her. He hates to see his employees cry. In spite of this employee’s chronic poor performance, Dr. Jones did not want to fire her because she had a family to support (Yes, Dr. Jones was more concerned about her keeping her job than she seemed to be!). Dr. Jones was so focused on her needs that he was neglecting his own needs and the needs of the rest of his employees.

Dr. Jones certainly had some challenges in front of him. He needed a lot of support to address his Achilles Heel as he turned the situation around. He did it. And, he learned valuable lessons along the way that he continues to apply.

Remember that star employee who was about to leave? She was so impressed by Dr. Jones commitment to addressing his Achilles Heel, she decided to stick around. Eventually, she did work on her own Achilles Heel and they now have a thriving team with a “zero-tolerance” policy for office drama among the employees.

*Dr. Jones is a fictitious name. The situation described above is compiled from several clients with whom I have worked. This scenario actually is one I encounter often in small businesses with caring business owners.

Scroll to top
We use cookies on our website to give you the most relevant experience by remembering your preferences and repeat visits. By clicking “Accept”, you consent to the use of ALL the cookies.
Cookie settingsACCEPT
Manage consent

This website uses cookies to improve your experience while you navigate through the website. Out of these, the cookies that are categorized as necessary are stored on your browser as they are essential for the working of basic functionalities of the website. We also use third-party cookies that help us analyze and understand how you use this website. These cookies will be stored in your browser only with your consent. You also have the option to opt-out of these cookies. But opting out of some of these cookies may affect your browsing experience.
Necessary Always Enabled
Necessary cookies are absolutely essential for the website to function properly. These cookies ensure basic functionalities and security features of the website, anonymously.
Functional
Functional cookies help to perform certain functionalities like sharing the content of the website on social media platforms, collect feedbacks, and other third-party features.
Performance
Performance cookies are used to understand and analyze the key performance indexes of the website which helps in delivering a better user experience for the visitors.
Analytics
Analytical cookies are used to understand how visitors interact with the website. These cookies help provide information on metrics the number of visitors, bounce rate, traffic source, etc.
Advertisement
Advertisement cookies are used to provide visitors with relevant ads and marketing campaigns. These cookies track visitors across websites and collect information to provide customized ads.
Others
Other uncategorized cookies are those that are being analyzed and have not been classified into a category as yet.
SAVE & ACCEPT